New Delhi: Actors Aishwarya Rai Bachchan and Abhishek Bachchan were clicked with their daughter Aaradhya Bachchan at the Mumbai airport as they returned to the bay after holidaying in New York City. Aish was seen twinning with her daughter in black while Abhishek wore a pink hoodie. Aishwarya wore a long black dress with a matching coat and Aradhaya was dressed in a black tracksuit.

Aishwarya held her daughter’s hand as they were clicked by paparazzi.

The Former Miss World was brutally trolled for her outfit choice. “What is she wearing,” wrote one. Another commented, “This woman has worst dressing sense”.

Giving us a sneak-peak of Aish and Abhishek’s vacation, musician and music maestro Amjad Ali Khan’s son, Ayaan Ali Bangash shared a picture with the couple. In the photo, Ayaan and his brother Amaan Ali Khan are clicking a selfie with Aishwarya, Aaradhya, and Abhishek. The caption of the photo read, “Thanks so much Bhaijaan and Bhabz #nyc #newyork @bachchan @aishwaryaraibachchan_arb @amaanalibangash.” 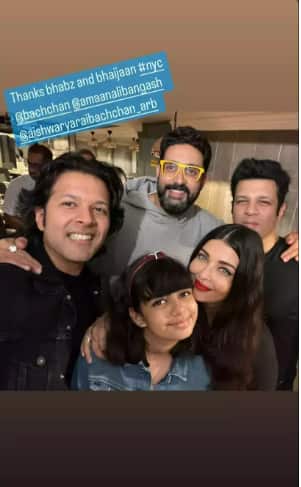