NEW DELHI: Bollywood actress Alia Bhatt on Sunday (July 10) received a special surprise from her actor-husband Ranbir Kapoor, as the ‘Saawariya’ star came to receive his pregnant wife at the airport. In a viral video, the ‘Gangubai Kathiawadi’ actor can be seen walking out of the airport in a super cool casual outfit, the paparazzi gathered around her and congratulated her on her first pregnancy.

Alia can be seen running towards her car, while saying ‘baby’, as she was surprised that her husband Ranbir came to the airport to pick her up, which she wasn’t expecting. Both the actors shared a warm tight hug and looked excited, as the paps captured their happy reunion.


Alia was seen in a white vest which she teamed with a white t-shirt and black joggers. She accessorised her look with a white luxury sling bag and had her face covered with a mask. On the other hand, Ranbir was spotted sitting inside his luxury car in a blue and yellow coloured check shirt and blue denims.

Celeb photographer Viral Bhayani shared a video on Instagram and netizens pointed out towards Alia’s huge baby bump. Some of them started trolling the actress and claimed that she got pregnant before the marriage happened. “She is at least 4-5 months pregnant,” read a comment.

“She is 4 months pregnant at least not two !! 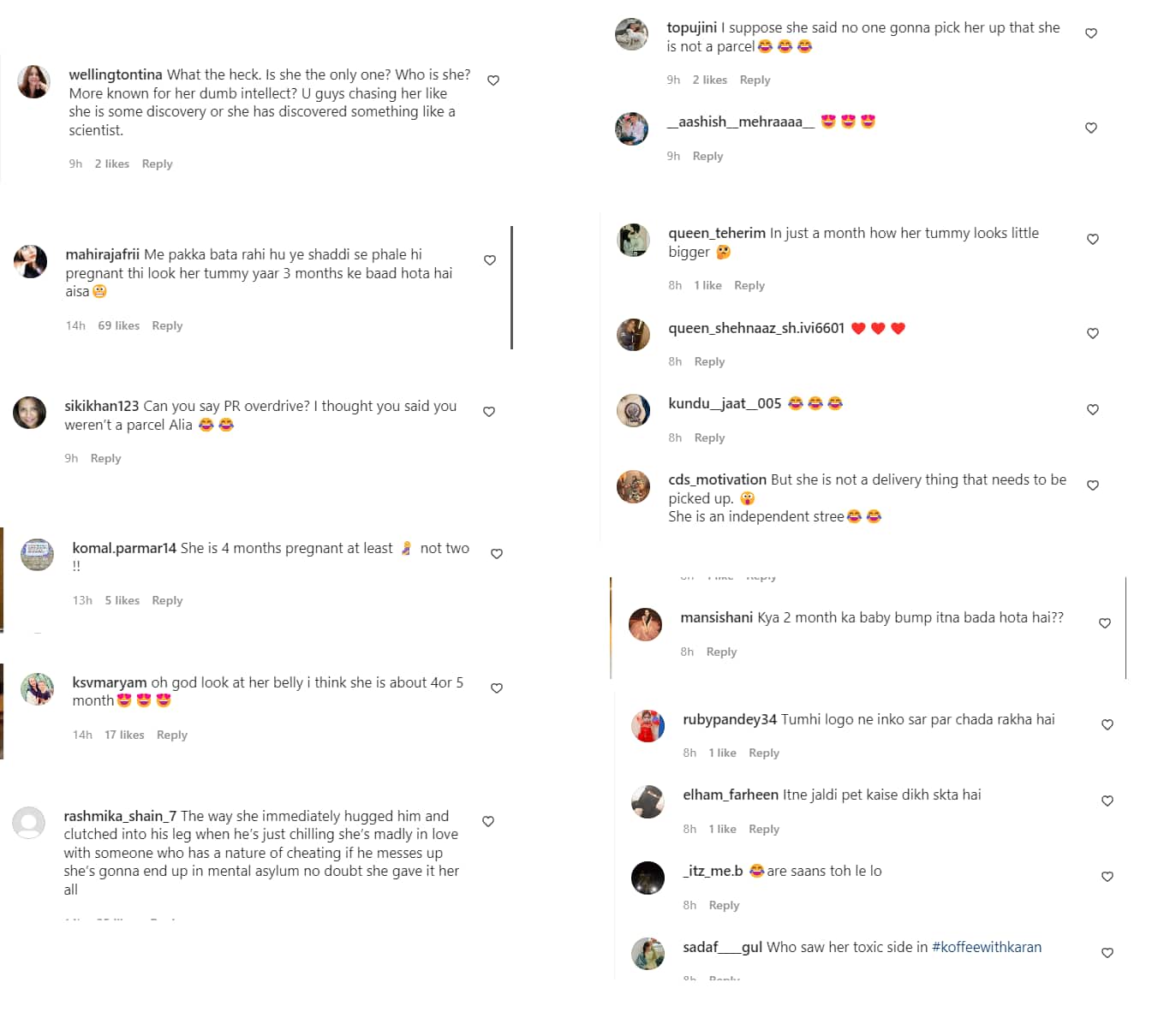 Some of them even trolled Ranbir Kapoor for sitting inside his car and not stepping out to welcome his wife. “Kud aram se car me betha hain apni pregnant wife ko lane tak nhi gya where many reporters surrounded alia very badly, That’s why i like ranveer singh, vicky more atleast apni wife ko protect kar rakhte hain public me.”

For the unversed, Alia Bhatt and Ranbir Kapoor announced her first pregnancy with a special post on Instagram. Her pregnancy announcement created a huge stir online and their fans and friends from the industry have since then showering the lovebirds with wishes and good luck.

Meanwhile, on the work front, Alia Bhatt has wrapped up her Hollywood debut film ‘Heart of Ston’ with Gal Gadot and Jamir Dornan.  She will be next seen in ‘Darling’ alongside Shefali Shah and Vijay Verma. The film is slated to stream on Netflix from August 5. Apart from that she also has ‘Brahmastra Part One: Shiva’ with hubby Ranbir and Amitabh Bachchan, which will release on September 9, and ‘Rocky Aur Rani Ki Prem Kahani’ with Ranveer Singh, which is gearing up for release on February 11, 2023.

Ranbir on the other hand will be next seen in ‘Shamshera’ with Vaani Kapoor and Sanjay Dutt. The film is all set to hit theatres on July 22.