NEW DELHI: Bollywood actress Katrina Kaif is all set to turn a year older. The actress will be turning 39 on July 16 and will be celebrating her day with her husband Vicky Kaushal in the Maldives. The actress will also be accompanied by her brother-in-law Sunny Kaushal and his rumoured girlfriend Sharvari Wagh.

Filmmaker Kabir Khan and his wife Mini Mathur, who apparently share a very close bond with Katrina and Vicky, will also accompany the couple on their exotic vacation. As per reports, Katrina and Vicky got engaged at Kabir and Mini’s house.

Check out their airport video here: 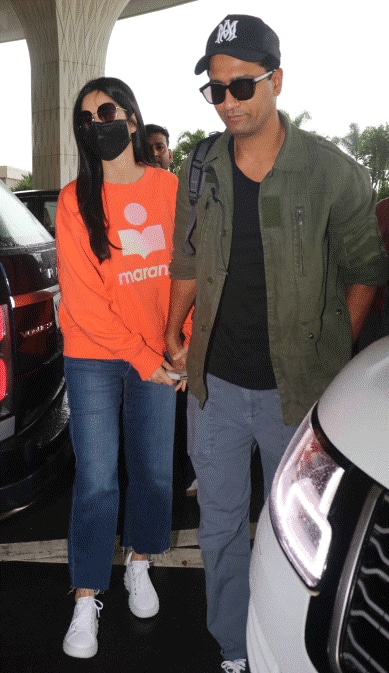 Katrina looked stunning as ever in an orange printed t-shirt and blue jeans. Vicky, on the other hand, sported a clean-shaven look in a black tee, olive green jacket and blue jeans. The couple twinned in cool black shades. They walked hand-in-hand at the airport as they got snapped by the paparazzi. Katrina, along with Vicky and her friends will be ringing in her 39 th birthday there.

Sunny and Sharvari worked together in 2021 released ‘Bunty Aur Babli 2’ and have been dating since then.  The actress was also seen as a guest at Katrina and Vicky’s intimate wedding in Rajasthan, held in December 2021.

On the work front, Katrina will next be seen in ‘Tiger 3’ with Salman Khan and Emraan Hashmi. The actress is also awaiting the release of ‘Phone Bhoot’ where she will be seen with Ishaan Khatter and Siddhanth Chaturvedi.

Vicky, on the other hand, has films like, ‘The Immortal Ashwatthama’, ‘Laxman Utekar’s untitled next with Sara Ali Khan and ‘Govinda Naam Mera’ alongside Bhumi Pednekar and Kiara Advani.