New Delhi: Bollywood actor Athiya Shetty has finally reacted to the rumours about her getting married to cricketer KL Rahul. Taking to Instagram, the `Hero` actor shared a post on her story, which reads, “I hope I’m invited to this wedding that’s taking place in 3 months, Lol”. For the past few days, there were speculations spreading around the corner that the `Mubarkaan` actor is planning to get married to her long-time boyfriend, cricketer KL Rahul in the next three months, which she has now finally dismissed. 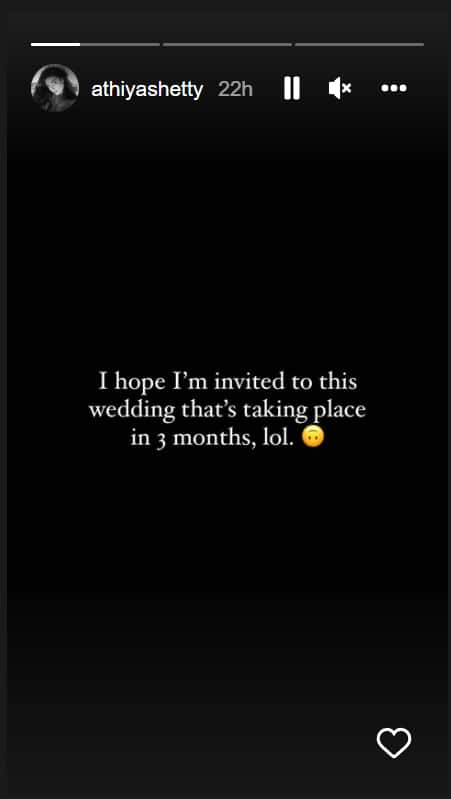 Previously, the `Motichoor Chaknachoor` actor also rubbished the rumours which stated that the couple has bought a new luxurious apartment in Mumbai and are planning to move into a `Live-in Relationship`.

Speaking of the lovebirds Rahul and Athiya, the couple made their relationship official the previous year as the Indian cricketer wished his ladylove on her birthday with a cute social media post featuring Athiya and himself.

The couple recently travelled to Munich, Germany together where Rahul underwent a surgery.

Meanwhile, the daughter of Suniel Shetty, Athiya, recently made her debut on YouTube as she opened her channel on the particular social media platform and was last seen in Motichoor Chaknachoor, alongside Nawazuddin Siddiqui. She made her acting debut with Salman Khan`s `Hero` along with Sooraj Pancholi in the year 2015. The film failed to impress the audience at the box office.