New Delhi: Rumours of Disha Patani and Tiger Shroff’s breakup are surfacing the internet now days. The actors have never confirmed or denied their relationship openly but their closeness made it quite obvious for their fans. Amid all this, Tiger has given a shoutout to Disha’s performance in her recently released movie and fans are loving it.

Taking to his Instagram story, Tiger uploaded a poster of the film and wrote, “What a gripping movie and fantastic performances by the whole cast congrats guys!” 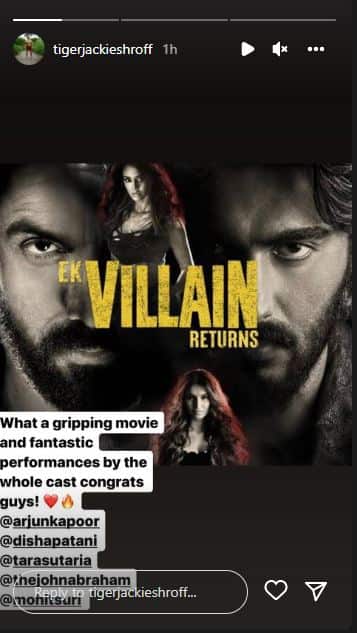 The reports of Tiger Shroff and Disha Patani’s break-up have been making headlines for the last couple of days but no confirmed word has been out from either of the actors or their families.

In the recent episode of ‘Koffee With Karan 7’, Ananya Panday seemingly confirmed that Tiger and Disha are together, despite them not confirming it. When she was asked about Tiger’s relationship status by Karan Johar, she said, I think he knows his Disha (direction).”

‘Ek Villain Returns’ is directed by Mohit Suri. The film is out in the theatres and is receiving a good response.