New Delhi: US President Joe Biden on Sunday (July 31, 2022) tested positive for Covid-19 again, slightly more than three days after he was cleared to exit coronavirus isolation. White House physician Dr Kevin O’Connor informed that Biden “has experienced no re-emergence of symptoms, and continues to feel quite well.” O’Connor said “there is no reason to reinitiate treatment at this time.” The White House said that it is a rare case of “rebound” following treatment with an anti-viral drug.

“Folks, today I tested positive for COVID again. This happens with a small minority of folks. I’ve got no symptoms but I am going to isolate for the safety of everyone around me. I’m still at work, and will be back on the road soon,” the US President tweeted.

This happens with a small minority of folks.

I’ve got no symptoms but I am going to isolate for the safety of everyone around me.

Biden, who is fully vaccinated with the Pfizer vaccine, and has also taken a first booster shot and an additional dose, later posted a video on Twitter and informed that he was “feeling fine” and “everything’s good.”

In accordance with Centres for Disease Control and Prevention guidelines, the US President will again go under isolation for at least five days and will isolate at the White House until he tests negative.

The 79-year-old was treated with the anti-viral drug Paxlovid, and tested negative for the virus on Tuesday and Wednesday. He was then cleared to leave isolation while wearing a mask indoors. His positive tests put him among the minority of those prescribed the drug to experience a rebound case of the virus.

“Acknowledging the potential for so-called rebound COVID positivity observed in a small percentage of patients treated with Paxlovid, the President increased his tested cadence, to protect people around him and to assure early detection of any return of viral replication,” O’Connor wrote in his letter.

“This in fact represents rebound positivity,” he wrote. 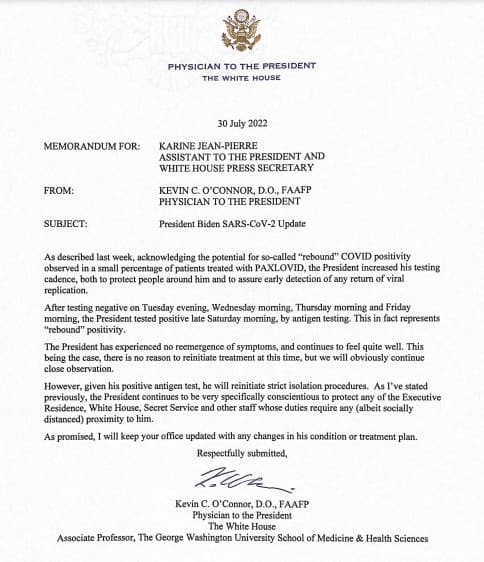 When Biden was initially released from isolation on Wednesday, O’Connor said the president would “increase his testing cadence” to catch any potential rebound of the virus.

Paxlovid has been proven to significantly reduce severe disease and death among those most vulnerable to Covid-19. US health officials have encouraged those who test positive to consult their doctors or pharmacists to see if they should be prescribed the treatment, despite the rebound risk.

Joe Biden’s visit to Michigan, his home in Delaware cancelled

Joe Biden’s Covid-19 positive test came just hours after the White House announced a presidential visit to Michigan this coming Tuesday to highlight the passage of a bill to promote domestic high-tech manufacturing. He was also scheduled to visit his home in Wilmington, Delaware, on Sunday morning, where first lady Jill Biden has been staying while the president was positive. Both trips, however, have been cancelled now as Biden has returned to isolation.