Mumbai: Bollywood diva Malaika Arora recently met the newlyweds Nayanthara and Vignesh Shivan in Mumbai. Taking to Instagram Story, Malaika dropped an adorable picture with Nayanthara and Vignesh. In the image, Malaika is seen standing next to the new Mr and Mrs in the town. Malaika looks stylish in a camouflage satin dress, while Nayanthara imparts uber cool vibes in a black tank top and olive green pants. Nayanthara`s husband opted for a burgundy shirt and a pair of jeans.

“Congratulations Nayanthara and Vignesh.. was so lovely to meet you both,” she captioned the post. 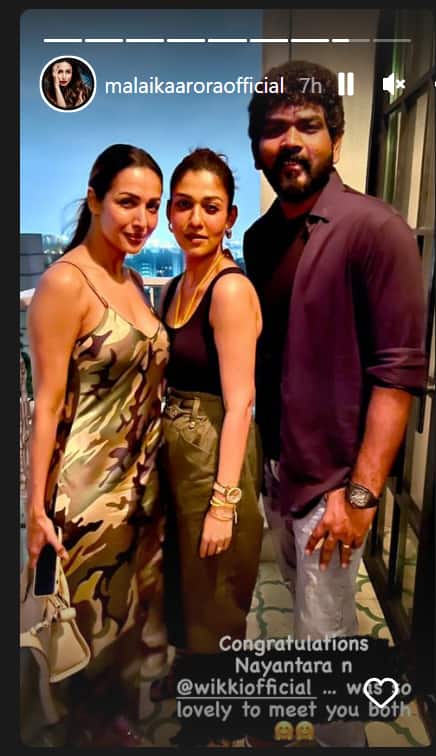 After dating for a few years, Nayanthara and Vignesh tied the knot on June 9 this year in an intimate ceremony at a private resort in Mahabalipuram. The ceremony was attended by close friends and family. Only a few celebrities were invited. Rajnikanth, Shah Rukh Khan, and Director Atlee were some of the few celebrities spotted at the wedding.

The couple is often seen updating their social media with mushy pictures of each other since their wedding. They recently took a trip to Thailand for their honeymoon and captured loving moments from there. Nayanthara and Vignesh began dating when they worked together on the latter`s directorial, `Naanum Rowdydhaan`. The film, which also starred Vijay Sethupathi, was a box office success.