New Delhi: Rumoured sweethearts Hrithik Roshan and Saba Azad are having a romantic vacay together and fans can’t get over it. After spending quality time in France, both have now reached London and are giving us major couple travel goals.

Saba on Tuesday shared a sneak peek into her holiday diary. She took to her Instagram handle and shared how the two got digg-in some mouth-watering burgers. Sharing the picture of hers and Hrithik’s burger, she wrote in the story, “Ogres touchdown London!! Let the feasting commence!!” 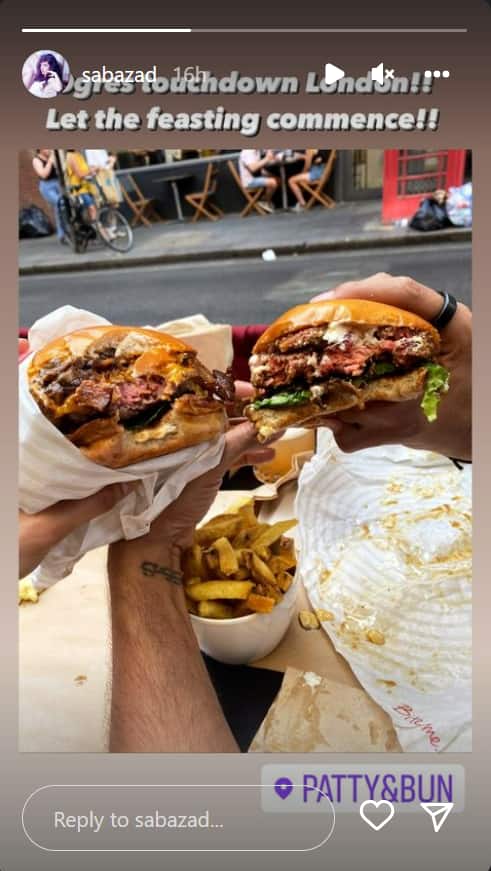 The two have been sharing glimpses of their trip with fans through social media. Earlier, Saba shared a video of them enjoying a long drive in the beautiful lanes of Paris. Also, Saba posted on her feed a picture from Paris that was clicked by Hrithik, she wrote in the caption, “Not a selfie, not my coffee Image by @hrithikroshan”

Hrithik and Saba have been dating for quite some time now. None of the two have confirmed it yet but their public appearances are quite a proof. They even walked in Karan Johar’s 50th birthday together hand-in-hand!

Hrithik was earlier married to Sussanne Khan and the couple has two sons – Hrehaan and Hridhaan. The duo separated a few years ago and are now co-parenting the sons. While Hrithik is with Saba, ex-wife Sussanne is also reportedly dating actor Arslan Goni.

On the work front, Hrithik will be soon seen in Siddharth Anand’s ‘Fighter’ co-starring Deepika Padukone for the first time. He also has the Hindi adaptation of the Tamil film, ‘Vikram Vedha’ with Saif Ali Khan in his pipeline.