NEW DELHI: ‘Jalebi’ actress Rhea Chakraborthy has been grabbing the eyeballs in connection with the Sushant Singh Rajput death case and her involvement in drug cases. She was back in headlines again after late actor’s sister Priyanka Singh levelled some fresh allegations on her and claimed that she ruined her brother’s life.

Moreover, the NCB too claimed that actress Rhea Chakraborty and others were allegedly involved in a major criminal conspiracy to run a drugs racket, for Bollywood and other high society people. In its draft charges filed before a Mumbai Special NDPS Court on Tuesday, the NCB detailed how between March-December 2020, Rhea, her brother Showik and 34 others accused in the death case of the late Sushant Singh Rajput, were part of a plot to finance, procure, sell, transport and distribute drugs like Ganja, Charas, Cocaine, LSD to the high-profile end-users.

Now, Rhea has retorted to all the allegations levelled against her with a cryptic post on Instagram. On Friday, she took to social media and expressed views on Priyanka Singh’s statement about ruining Sushant’s life. She wrote, “Rise above the noise. Rise above the ego. Rise so above that they only point fingers at you. Because you are where they could never be. You are at peace. You fly with love. You feel compassion even when they give you no reason to. Let them wonder. You are enough. You are complete. You are lovely the way you are. Don’t let them tell you otherwise.” 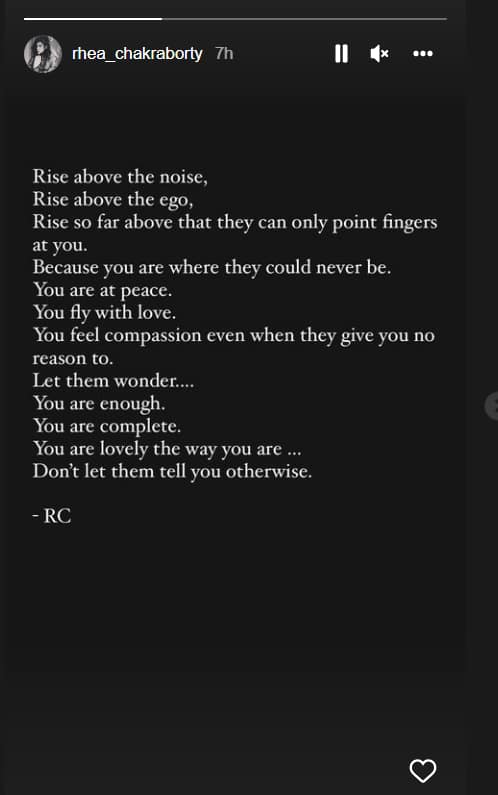 In a fresh interview with India News, SSR’s sister Priyanka Singh accused Rhea Chakraborty. She said, “From 2019, his life started ruining as Rhea Chakraborty entered his life. For the first time, there were issues between me and my brother. Within six days all this happened.” When asked if she is suspecting that Rhea was planted in her brother’s life, she quipped, “Ji, of course.”

Priyanka also alleged in the same interview that ever since Rhea came into SSR’s life in 2019, trouble began. She said issues between her (Priyanka) and Sushant started, which wasn’t the case before.

She also said that Rhea might be sent purposely into Sushant’s life and that Bollywood might have some role in his death, questioning people from the industry who defended the actress’s media trial.

The NCB in its draft charges filed in the drug case linked to actor Sushant Singh Rajput’s death has claimed actor Rhea Chakraborty received multiple deliveries of ganja from the co-accused, including her brother Showik, and these were handed over to Rajput.

Sushant Singh Rajput was dating Rhea Chakraborty at the time of his death. The NCB began probing the alleged use of drugs in some quarters in Bollywood after the late actor’s sudden demise. In 2020, the NCB had arrested Rhea and her brother Showik Chakraborty in a drugs case related to late actor Sushant Singh Rajput’s death. The actress was lodged in Mumbai’s Byculla Jail for more than a month.

She was granted bail by the Bombay High Court almost a month after her arrest. Besides Rhea, her brother Showik Chakraborty and several others are also arraigned as accused in the case for alleged consumption, possession and financing of drugs. Most of them are out on bail.

The central agency has been probing the alleged drug use in Bollywood and television industry following the death of actor Sushant Singh Rajput, 34, who was found hanging in his apartment in suburban Bandra on June 14, 2020. The CBI is probing the case pertaining to his death.