New Delhi: Sushmita Sen, who enjoys traveling, recently posted a video on Instagram from her recent vacation to Italy, and what got fans excited was that her boyfriend, former IPl chairman Lalit Modi, commented on it.

The ‘Main Hoon Na’ actress shared this video on Instagram:

Align, pause, breathe…let go!!! A lesson in surrender, as I experience the cushioned embrace of the Mediterranean Sea!

Where life has depth…I am all in!!

I love you guys!!!, the caption read:

‘Looking hot in Sardinia’ Lalit Modi commented on the post: 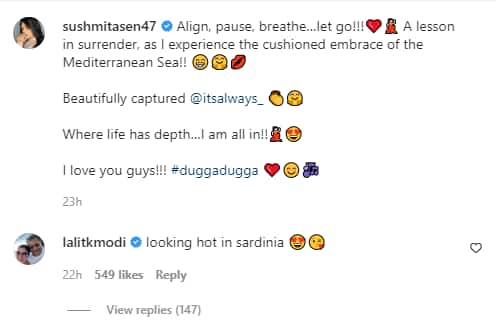 Lalit Modi recently caused quite a stir on social media when he announced that he had been dating the actress. He shared some pictures with the actress and wrote:

Just back in london after a whirling global tour maldives sardinia with the families – not to mention my #better looking partner sushmitasen47 – a new beginning a new life finally. Over the moon. In love does not mean marriage YET. BUT ONE THAT BY GODS GRACE WILL HAPPEN. I JUST ANNOUNCED THAT WE ARE TOGETHER.

The fans reacted quickly to this. While some seemed happy and supportive, others were angry, and conversations mainly centered around the age difference between the two.

On the work front, the actress was last seen in web-series ‘Aarya’ which was liked by both fans as well as critics. It was nominated for international Emmy awards as well. The series, which has two seasons, is available on Disney plus Hotstar for streaming.