New Delhi: After the much-anticipated teaser of Mani Ratnam`s `Ponniyin Selvan` took the internet by the storm recently, it has now sparked a war of words between Tamil and Telugu cinema fans, as the movie is being compared to SS Rajamouli`s magnum opus, `Bahubali`.

While `Bahubali` fans have boasted that the VFX of the Prabhas-starrer movie was much better, others have pitched for `Ponniyin Selvan`, sharing that the Kollywood industry “can do wonders as well”.

The ongoing debate between the films has given rise to a number of tweets. One user wrote, “Might be harsh but nowhere near to visuals and VFX of Bahubali (sic).”Another user joined the debate and commented, “Trying to match #Bahubali But they can`t. How is #PS1 Teaser give your honest reviews (sic) For me: average (sic) For u?” 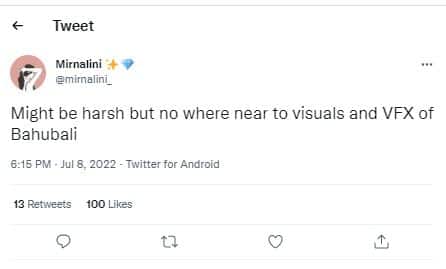 A user who wrote in support of `Ponniyin Selvan I`, said it was Kollywood’s answer to Bahubali. “Epic. Kollywood answer to #Bahubali . #PonniyinSelvan will be an epic blockbuster. Probably a pan-Indian material. ##ARR (fire emoji)(fire emoji)(fire emoji) Visuals grand. Need to see whether #ManiRatnam has still got it. Let`s see.” Another tweet said, “Hello BAHUBALI Here`s Our Ponniyin Selvan Will Comes To Break Your Record.” 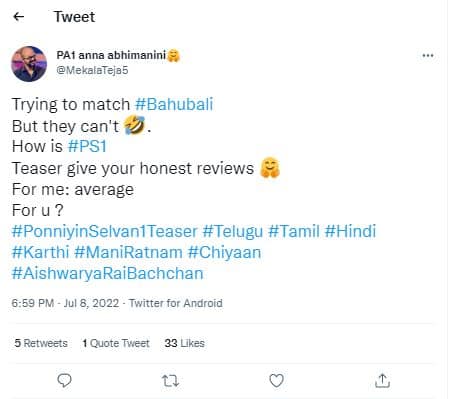 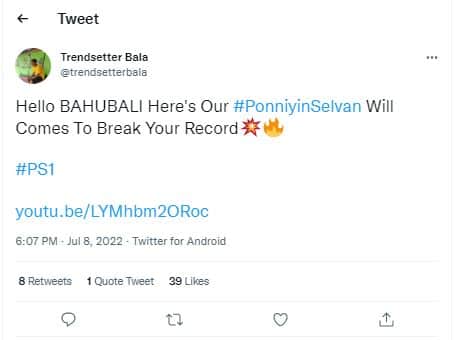 Meanwhile, the teaser of `Ponniyin Selvan` portrayed magnificent locations of the ancient era as the Cholas were seen fighting valiantly amid a power struggle in the 10th century. With picturesque destinations, bloody wars, and breathtaking grandeur, `Ponniyin Selvan` looks no less than an absolute thrill fest.

The teaser of this magnum opus was launched in Chennai at a grand event on July 8. The entire cast and crew of the film were present as well. Taking to social media, actors Amitabh Bachchan, Mahesh Babu, Rakshit Shetty, and Suriya also shared the teaser.

`Ponniyin Selvan` stars an ensemble cast of Aishwarya Rai Bachchan, Vikram, Karthi, Trisha, and Jayam Ravi. Aishwarya will be seen in dual roles. She will play queen Nandini, the princess of Pazhuvoor, who is on a mission to seek vengeance, as well as Mandakini Devi in the historical drama.

`Ponniyin Selvan-Part 1` is a cinematic adaptation of author Kalki Krishnamurthy`s Tamil novel of the same name which was released in the form of a series during the 1950s.

The A.R Rahman musical is all set to hit the theatres on September 30, in Hindi, Tamil, Telugu, Malayalam and Kannada. The big-budget period film will be released in multiple parts.