NEW DELHI: Kangana Ranaut, Swara Bhasker and several other Bollywood celebrities came out to condemn the horrific incident in Udaipur where a tailor was beheaded for supporting suspended BJP leader Nupur Sharma over her controversial remark.

Kangana’s post read, “This man was beheaded in Udaipur today for supporting Nupur Sharma and jihadis made a video of the beheading. They forcefully entered his shop and chanted slogans of sar tan je juda… all this in the name of God! They beheaded Kanhaiya in Udaipur in the name of God… and then posed like this. Also made several videos I don’t have courage or see those videos, I am numb…” 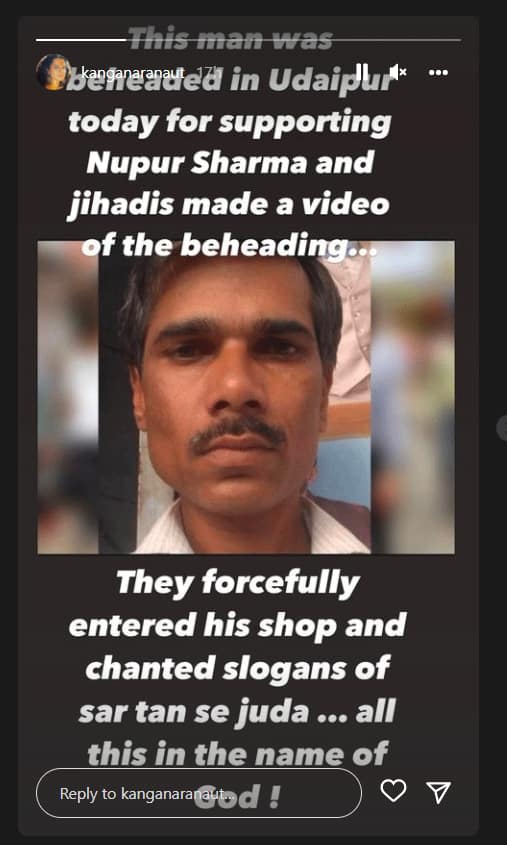 Swara Bhasker wrote, ‘Despicable and utterly condemnable.. The perpetrators should be dealt with promptly and strictly, as per law! Heinous crime.. Unjustifiable! As one often says.. if you want to kill in the name of your God, start with yourself! Sick sick monsters! #UdaipurHorror’. 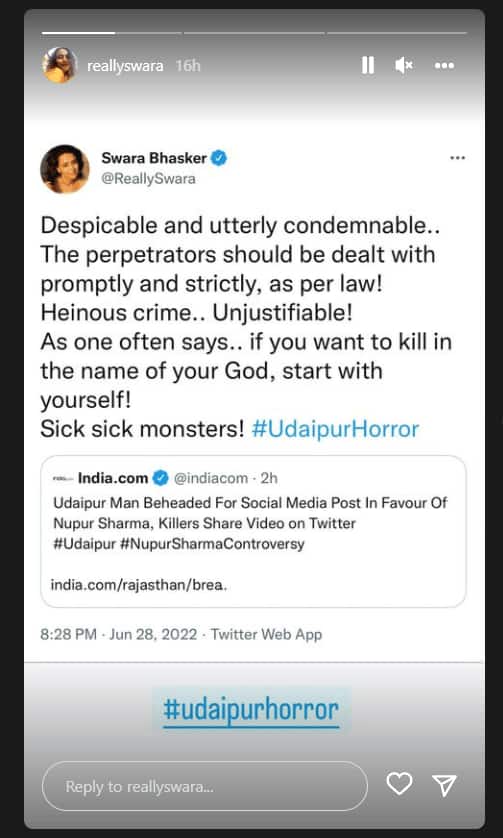 Gauahar Khan wrote, “Sickened to my stomach. By losers being the flag bearers of religion . All religions included , the murderers who killed a man over a post should be dealt with with extreme punishment. Is this the way to reperesent ur faith ?? . Disgusting! Criminals . All alike”

Ranvir Shoray wrote, “I’d say this is a wake up call for all those who help paint followers of #Islam in #India as victims, instead of encouraging them to introspect and address the problem of #fundamentalism & extremism within, but you can’t wake up someone pretending to be asleep. #Udaipur.”

I’d say this is a wake up call for all those who help paint followers of #Islam in #India as victims, instead of encouraging them to introspect and address the problem of #fundamentalism & extremism within, but you can’t wake up someone pretending to be asleep. #Udaipur https://t.co/cWi3Vek7Zj
— Ranvir Shorey (@RanvirShorey) June 28, 2022

In the bararic incident, the tailor, Kanhaiya Lal was murdered by two men who had posted videos online that said they were avenging an insult to Islam. The body of Lal was handed over to family members after postmortem on Wednesday. As per PTI, the incident took place on Monday after two assailants entered Lal’s shop in Dhan Mandi posing as customers. As the tailor took measurements Akhtari attacked him with a cleaver, nearly severing his neck. The other man shot the brutal murder with his mobile phone.

The men fled from the scene and later uploaded this clip on social media. In another video, the alleged assailant said they ‘beheaded’ the tailor and threatened the Prime Minister. As the videos circulated on social media, tension escalated. Shopkeepers in local markets downed shutters and a mob pelted stones and set two motorcycles on fire. For several hours, shopkeepers stopped police from taking away the body, saying they will allow the removal of the corpse only after the murderers are arrested and compensation — Rs 50 lakh and a government job — given to the victim’s family, said PTI. Later, they agreed to assurances given by the authorities.

Treating the murder as a terror incident, the Centre directed the NIA to extensively probe the ‘brutal’ murder, especially whether any organisation and international links were behind the sensational killing.

A spokesperson of the Ministry of Home Affairs said on Twitter that the “MHA has directed the National Investigation Agency (NIA) to take over the investigation of the brutal murder of Shri Kanhaiya Lal Teli committed at Udaipur, Rajasthan yesterday”. “The involvement of any organisation and international links will be thoroughly investigated,” it said. The Home ministry had rushed a probe team on Tuesday night after a preliminary probe suggested that the two accused, arrested by the Rajasthan Police, were influenced by the ISIS, a banned terror group.